You're looking at an individual entry — check out the index for more!

Blogging with Fastify, Vite and Vue 3

I've always been incredibly envious of Amos Wenger's blogging setup, and the amazing write-up covering it. Amos of course wrote ridiculous amounts of Rust code to a) crawl Markdown entries from the filesystem, b) sync them to a SQLite database for maximum efficiency and c) compile the entries into HTML with a number of transformations to patch up things like image paths and syntax highlighting for code blocks.

Amos' blog is responsible for over half my Rust education (so far). He goes into excruciating detail explaining multiple iterations to solving a problem and you get to the bottom of his articles feeling like you've just read a book, a really good one. I'd say he wrote the best resource available today to learn about Rust's borrow checker. But I digress.

This blog is built with fastify-vite v3.0.0-alpha.11 and Vue 3. It is statically generated, Markdown files are loaded and made available for hot reload through the server-side using Vite's API and article social media cover images are automatically generated from a template SVG. All deployed to Netlify like it's any other static site generator.

This is the main piece of code that sets everything up in blog.mjs:

This blog was originally built with NuxtPress, an abandoned project of mine while I still worked mainly with Nuxt.js. NuxtPress was essentially a Nuxt.js plugin that would load Markdown files and provide an interface to them in pages. It didn't have much support within the Nuxt.js core team, and after some time, an official alternative was launched by Nuxt.js.

So you might be wondering: why stop using Nuxt.js at all? Why not just migrate to Nuxt Content? Or, why not just go with Astro, the fanciest new kid on the block? Or Eleventy, Hugo, Jekyll? Why create something new?

In the video where I introduce Blueprints for fastify-vite, I go into detail on some of the reasons why I'm no longer interested in Nuxt.js, or Next.js for that matter. But the general motivation is simplicity in tooling. I don't want to have to delegate this kind of thing to a full blown framework. Parsing Markdown entries, making them available to a web application and statically generating it should be a straightforward process, relying on well targeted libraries instead of subjecting myself to an entire ecosystem of architectural decisions.

Within Node.js and Fastify lie all the building blocks for a static site generator. Fastify provides the inject() utility to quickly render HTTP requests on any Fastify application without having to actually boot a server, and you can use the fs package to read and write files.

For convenience, I used two external npm packages to more easily traverse and watch for changes on the file system. More on that below.

I wrote a Fastify plugin to conveniently integrate klaw and chokidar in a unified API. I wanted to be able to easily traverse the filesystem looking for Markdown files, and also watch for any changes made to them. In store.mjs, structured as a Fastify plugin, you can see it in action loading and tracking changes on the entries/ and pages/ folders:

In case I'm running a private branch of my blog with drafts and want to have them loaded, I just pass in drafts to the command line running locally:

The store.mjs plugin will load and track changes to Markdown files, and also takes care of converting them to HTML. Since this blog was originally built with NuxtPress, the adapted code is still using @nuxt/markdown, another library I wrote to support it. But it could be using remark directly. The blog store is then finally added as blog to the app instance via decorate():

To render the markup of this blog I'm using fastify-vite, or rather, an alpha version of its next major release. There's no documentation for this new version yet, but most of the current documentation applies. The new version deprecates the useHydration() hook in favor of specialized usePayload() and useData() hooks.

The cool thing about fastify-vite is that it's very constrained in what it does: it provides just the bare minimum structure to load and server-side render client JavaScript applications. In this case I'm using a small Vue 3 application and the fastify-vite-vue renderer adapter.

So in a nutshell, with fastify-vite and fastify-vite-vue, all you need to get your Fastify application to render a Vue 3 component is to add a file under the views/ directory and have it export a path constant setting the route. Since we also need some dynamic data from the server, we can also use getPayload() and usePayload(): the first will run on the server prior to SSR, and the other will run during SSR to access any data that was fetched. It will also work for client-side navigation, just like you'd expect asyncData() to work in Nuxt.js.

Through getPayload()'s context parameter we have access to fastify and req, which we can use to access the desired entry based on the full URL path (it's how store.mjs registers them in the fastify.blog.entries object).

In order to automatically generate social media covers for each entry, I opted for a simple SVG template I could create on Inkscape. I created text boxes with placeholders following the ES6 template literal syntax, and then saved the file so it could be used as a dynamic template. 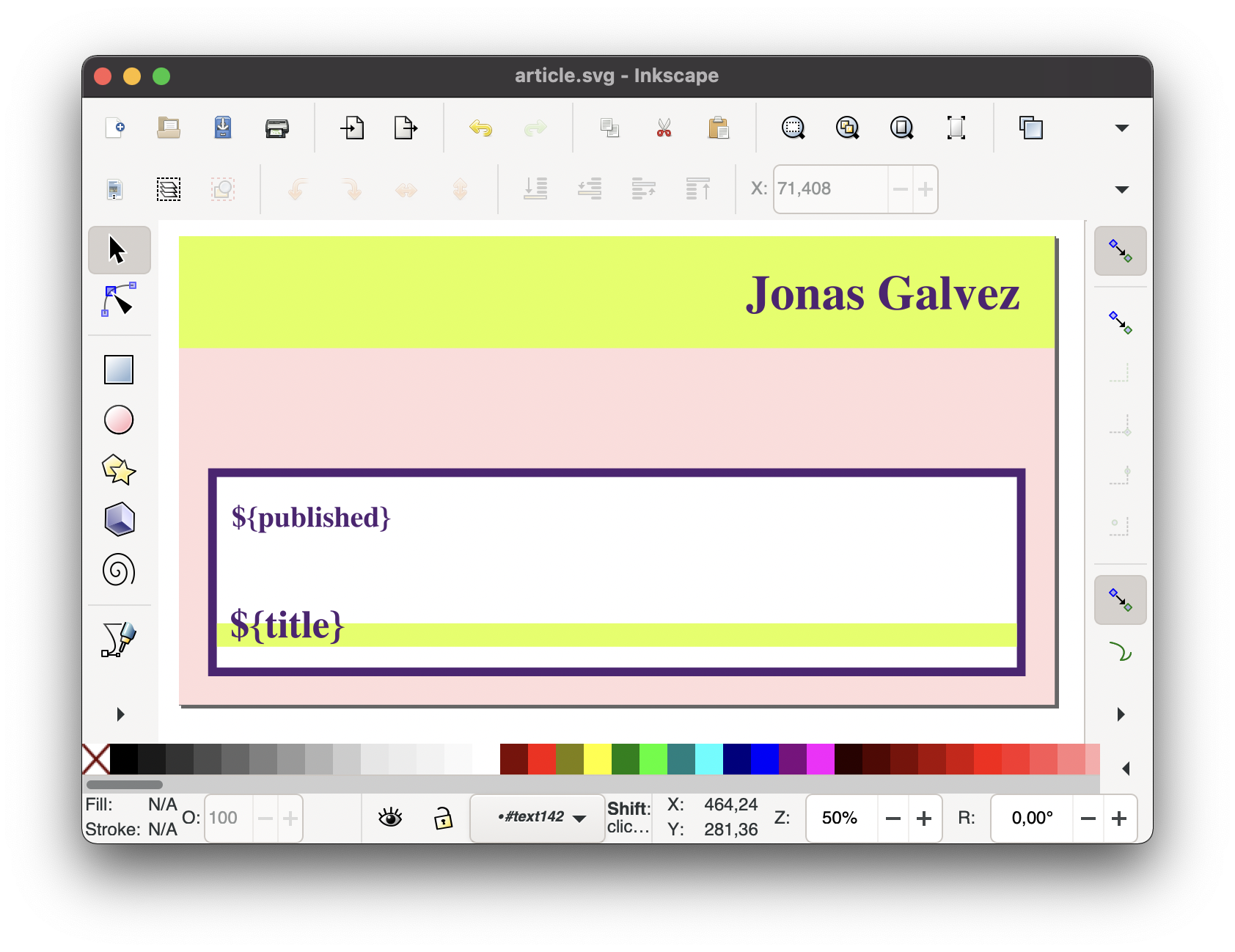 There are multiple other interesting solutions to do this, such as Michele Riva's gauguin and many others, but I managed to achieve what I needed with this simple Fastify plugin:

Now, /cover/<entry-path>.png will work to generate covers for any existing entry.

Using a plugin like vite-plugin-md or vite-plugin-markdown lets you treat Markdown files as local sources automatically and you get hot reload functionality in development for free.

However, I didn't want this blog to rely on these plugins because it would keep the setup tied to the filesystem. I wanted an abstraction layer so if I ever wanted the content to come from an external database, it could. This creates two problems: how to watch for changes on the files, and how to get the frontend to hot reload when they do?

Thankfully, even though we're not using a Vite plugin to handle Markdown files, we're still using Vite and have access to the development server instance, which is nothing more than an Express middleware integrated with Fastify through fastify-vite. In store.mjs, I patched up addEntry() and addPage() to also send a custom event, as hinted at in Vite's documentation.

Now, every time a file changes, we notify the frontend through Vite's WebSocket connection. I still needed to change views/entry.vue a little to actually listen to these changes and reload the content display. I do so using import.meta.hot, made available by Vite. But more importantly, since the request path is the entry ID itself, I also needed to change getPayload() to remove /-/payload from it, if present. This is because fastify-vite lets you retrieve a route's payload via an automatically generated endpoint which follows the format /-/payload<url>.

During SSR, getPayload() is executed automatically and req.url will be the original route path. But if you use fastify-vite's fetchPayload() helper to retrieve a route's payload on-demand, the URL will be prefixed with /-/payload. With this fix in place, the next step is to set up a listener to the store-update custom event that will update the live view:

See it in action on the video below:

Static generation is handled by fastify-vite. It'll prerender all available URLs, and pregenerate the cover image PNG files for each entry locally so when it's deployed to Netlify it doesn't have to run Chromium on the server because images will already be made available when you do a test build locally. The generate settings are in generate.mjs:

This is how long it takes to generate:

You can get the source code here: https://github.com/galvez/blog.

Getting this blog running represents a big milestone for fastify-vite.

I hope to be able to reproduce the same setup using other renderer adapters, especially the Solid one which is getting ready for the v3 release.

I am personally happy using Vue 3 and don't think I'll be changing this codebase too significantly for the foreseeable future, except maybe for the CSS which is kind of a mess right now — c'est la vie.